Romeo and Juliet explores the theme of time and the role it plays in the tragedy.  The conversation between Capulet and Paris explores the theme of time.  When Paris asks to marry Juliet.  Caplets says ‘My child is yet a stranger in the world; …Let two more summers wither in their pride’  Juliet is 13 years old extremely young even for Elizabethan times.  He is presented as a caring father, protecting his daughter from growing up too quickly.

Marriage for Juliet would inevitably lead to motherhood as Paris states, ‘Younger than she are happy mothers made.’  This reveals that marriage amongst the nobility is about producing an heir as quickly as possible.  Lord Capulet”s reply ‘too soon marred are those so early made’ is the voice of experience and reason.

However, he has decided to hold a feast which he believes will reveal that Juliet is the most beautiful.   The audience would believe that Capulet holds these feasts often but in Act 5 scene 1 he confesses that it has been 30 years since he has last at a party.  Therefore the audience can see that Capulet is keen to secure Paris as a suitor for Juliet.  Why wouldn’t he wait for such a ‘solemn’ occasion?

After the untimely death of Tybalt (the same day as Romeo and Juliet’s wedding). Capulet”s impatience to secure Juliet the marriage speeds up the plot.  Paris states, ‘These times of woe afford no time to woo.’  This is true of Romeo and Juliet their wedding night is surrounded by a background of secrecy, banishment and death.   Capulet worried by Juliet’s constant weeping for Tybalt gives Paris a date for the wedding.  ‘Thursday, tell her, She shall be married to the noble Earl.’

Capulet leaves Juliet desperate and alone when he tells her to ‘you be mine, I’ll give you to my friend;’ showing his true intentions Juliet is his property to dispose of her as he feels.  The monosyllabic words ‘hang, beg, starve, die in the streets.’ are powerful and disturbing to the audience as Shakespeare’s use of dramatic irony makes them aware that Juliet is already married.

Lady Capulet and the Nurse’s response to Capulet”s condemnation of Juliet adds to her isolation and fears. She cries, ‘Delay this marriage for a month, a week, or if you do not, make the bridal bed in that dim monument where Tybalt lies.’ Another good example of Shakespeare’s foreshadowing time becomes the enemy in Romeo and Juliet’s relationship. The play ends with Juliet dead in the monument also relating to the theme of destiny.

Act 4 Scene 1 begins with the theme of time. Paris tells the Friar, ‘her father ‘in his wisdom hastes our marriage to stop the inundation of her tears.’ Capulet sees her grief as ‘dangerous’ The Friar’s plan to save Juliet from a second marriage to Paris also explores the theme of time. The whole plot hinges on Friar’s Lawrence’s potion allowing Juliet to appear dead to her family and his ability to inform Juliet of his plan. Again the Prologue reminds the audience that they are ‘star-crossed lovers’ and ‘their doomed love” maybe they are filled with hope that the young lovers can be reunited.

The hope the audience might have felt is soon destroyed in Act 4 Scene 2 as Capulet brings the wedding forward to Wednesday when Juliet tells him she has ‘learnt to repent the sin of disobedient opposition …Henceforward I am ever ruled by you.’

The first death of Juliet leaves the audience in suspense. She has made the hard choice of taking the potion despite misgivings of it might be poison. The effect of the potion is timed so that she doesn’t wake during the funeral and close down any possibility of her marrying Paris. Friar Lawrence is attempting to protect himself but also to keep the young lovers secrets. Ultimately time defeats the young lovers as they are only reunited in death in the final scenes of the play.

There are many contradictions in Stevenson’s introduction of this important character. He is the main vehicle for investigating the strange case of Jekyll and Hyde.

The reader learns he is a man who tries to be non judgemental. He recognises that all humans have failings and he will not intervene to prevent anyone making a mistake. He has been the last person people see before receiving the death penalty but he doesn’t become sentimental or emotional – he remains professional.

Gabriel Utterson has a small circle of friends some close relatives. Richard Enfield with whom he takes regular walks on a Sunday afternoon. They seem to have very little in common- they walk in silence and they are relieved to see anyone else they can call to. Both men are respectable gentleman so their weekly walks are a show to the world they have nothing to hide. Interestingly, the walks take place on the sabbath a time when everyone attends church. Maybe a reflection of Victorian hypocrisy – hiding real thoughts and desires from society. Utterson’s private drinking, his love of the theatre but rarely attends. His serious outward appearance which relaxes when he’s had a glass of wine.

Richard Enfield is the opposite of Gabriel Utterson he is a popular man about town. His conversation with Utterson on this particular walk is lively and engaging as he recounts the story of the door. Initially he wants to establish that he is not a gossip because it is ungentlemanly and beneath him. He is also aware of how gossip can destroy reputations.

Again Enfield seems to have a dark side as he confesses to being on the road in the early hours of the morning. He offers no explanation of his behaviour but he condemns the behaviour of Hyde.

Enfield tells the story of Hyde trampling a young girl in the early hours of the morning. Enfield points out that even if it was an accident there was a distinct lack of humanity from Hyde. He made no attempt to stop and to enquire if the girl was harmed. It was the intervention of Enfield and a group of women who prevented his escape from justice.

Enfield’s story reveals two things about Victorian society money buys you power and you can live above the law. Secondly there is little or no protection for the vulnerable especially children. Hyde has to pay the child compensation to protect his reputation.

Both characters Utterson and Enfield raise the strange relationship between Jekyll and Hyde. The compensation paid to the child comes from Jekyll’s account not Hydes. Hyde gets the cheque in the early hours of the morning (he is not a blood relative). The spectre of blackmail and homosexuality are touched upon.

All of Enfield’s story builds mystery and suspense but most intriguing of all is the description of Hyde – animalistic, demonic, frightening and repulsive. The use of biblical language in his description brings in the theme of the supernatural – what power can this creature have over the respectable Dr Jekyll?

The Story of the Door

The description of the door helps to build mystery and suspense from the beginning. The door which Hyde uses is hidden from public view. The door is neglected and it does not look like it belongs in the area. Significantly, Hyde has a key to the door which gives him a sense of entitlement and empowerment- he can come and go as he pleases. A door can be a symbol of freedom and imprisonment. The key has obviously been given to Hyde which tells the reader he is trusted and close to the owner. The door which Hyde uses is hidden from public view therefore it introduces the theme of secrets and appearance vs reality. In Victorian society are appearances given greater importance than the truth. Both Utterson and Enfield agree that there is cause for concern about the relationship between Jekyll and Hyde but they agree to remain silent.

I was thinking about all the heartbreaking stories this week about family members dying alone while Downing Street partied. It made me realise that the social hierarchy remains unchanged from Victorian times. Imagine being one of those families living with the pain, deep sorrow and guilt.

When my parents died in 2018 it was so difficult to describe the sadness but also the acceptance that their suffering was coming to an end. The whole family was allowed to be by their bedside. We could all say our final goodbyes. They both had funerals where friends and family could get together to celebrate their life.

To think that so many families had quick, cold empty send offs trying to follow rules whilst Downing Street and Whitehall was party central. Asking people to just move on shows a clear lack of value and understanding of the importance of family to ordinary people.

The message of Scrooge lying there cold and alone in Stave 4 was supposed to be a lesson to those who put the love of money above humanity which makes the events over the last two years more painful. They didn’t deserve to die under such harsh conditions. Healing from such grief is going to take time because their anger at such injustice is not going to bring them back. 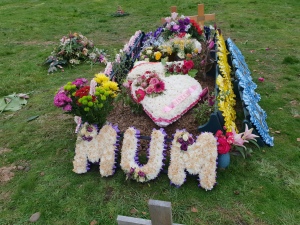